We’re almost halfway through July and if you haven’t read This One Summer by cousins Mariko Tamaki and Jillian Tamaki, I would highly recommend it. I think it’s going to be the graphic novel of the summer (and not just because it has the word “summer” in the title). Continuing their partnership after the success of Skim, their first graphic novel together, the Tamaki cousins have created a poignant and beautiful story about a young girl’s summer at her family’s cottage.

For as far as she can remember, Rose and her family have been going to their family cottage in Awago Beach. Her days there are filled with summery activities with her cottage friend Windy. This year though, things are slightly different: Rose’s mother seems more distant; she can’t seem to relax and her parents keep having small fights. At the same time, the teenagers that hang around the convenience store seem to be getting in their own kind of trouble. Will the cottage ever be peaceful again?

This book reads like a dreamy haze, like you’re reading and watching a snapshot of someone’s life. It makes you feel detached and involved at the same time. It reminded me of that one episode of HBO’s Girls in season 2 (“One Man’s Trash“) where Hannah spends a few nights at a stranger’s house, living his life for a while only to return to her real life afterwards as if it never happened. I could imagine Rose thinking back to that one summer and feeling the same way we do as we read the novel.

The artwork in this book is stunning. It’s so detailed and realistically drawn while keeping with the dream-like atmosphere. The book is printed with various shades of purple which I found was a good, unique choice. Jillian Tamaki does a great job illustrating This One Summer with innovative panels and she uses the space to her full advantage. Honestly, you can get lost in the art alone. (I sure did – every page was as breathtaking as the last.) 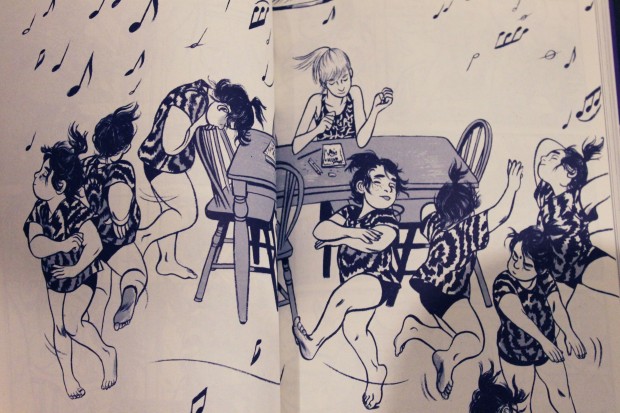 Rose sits at the table while Windy waltzes around the room.

Of course, a graphic novel wouldn’t be a graphic novel without the writing. I love how the story juxtaposes idyllic summer cottage life with intense personal and family issues. Mariko Tamaki’s writing is short and sweet but I think it captures the thoughts of a young/teenage girl really well. Everything is written realistically and you can easily sympathize with the characters (except for certain teenagers…) I’ve read critiques that say “nothing happens” in the book but, because I read it as a glimpse into someone’s life, I found that comment to be unnecessarily harsh; we don’t see some of the conflicts resolved because the conflicts haven’t fully resolved themselves yet. After the summer the characters will still be figuring out their lives and moving on from the events that occurred. Personally, I found the story to be engaging enough for me to want to keep reading, especially when paired with Jillian’s breathtaking art. Plus, I do think that everything was explained quite well by the end of the novel and it made total sense to me. So do yourself a favour: pick up this book this summer. You will not regret it.

Verdict: Might not be everyone’s cup of tea (as indicated by the critique above) but definitely mine. It is poignantly written and structured with astounding artwork. I’ve already started my re-read and I will say, without a doubt, that this novel gets better with every read (the details revealed by the end will alter the way you read the novel the second time). I will definitely be reading this again and again.

Read if: You’re looking for a quick but beautiful read for the summer (or during the year when you want to feel like it’s summer), you like graphic novels, like novels that are realistic and probing.

Have you read This One Summer and/or Skim? Do you read graphic novels? What’s your favourite summer memory?