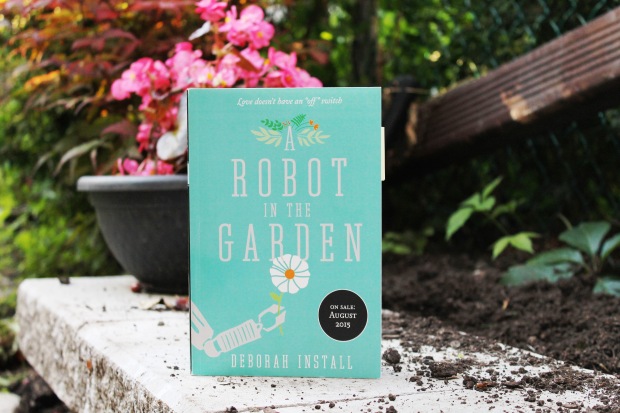 [I received a copy of this book from its Canadian publisher Penguin Random House Canada. This does not affect my review of the novel.]

“Love doesn’t have an “off” switch” is the indisputable tagline on the Canadian cover of Deborah Install’s A Robot In The Garden. I first heard about this book at Random House Canada’s Spring Preview where it was described as “Pixar-esque.” Everyone who had read the book already were raving about it, and it seemed like everyone had fallen in love with the sentient robot Tang. As someone who loves Pixar movies and books about unlikely friendships, it really wasn’t a huge surprise to me when I realized that my love for this book doesn’t have an “off” switch either.

Set in a world where cooking and driving robots are commonplace, A Robot in the Garden brings together two unlikely friends – Ben, a vet school dropout whose wife Amy is constantly annoyed with him, and Tang, a beaten-up robot with a cracked part – and takes them on an around-the-world trip in search of someone who can restore Tang to his full health. Along the way, Tang proves to be more than just a robot to Ben: he is a friend, a compassionate companion, and a never-ending source of entertainment (and sometimes frustration). Tang can be toddler-like at times (in the Acknowledgements, Install credits her son as a source of inspiration), but he also constantly surprises with his ability to touch those he meets.

This book was the perfect weekend read and I’m sure many people will join me in the Tang fan club. It was such a joy to watch him evolve from a basic electronic device to a human-like being with likes and dislikes, friends and enemies. The two friends get into some pretty entertaining situations, and it made me want to hug the book to my chest. Similarly, it was also rewarding to see Ben change throughout the course of the novel too. As he learns to take care of Tang, he discovers things about himself that he had not understood or realized before. I don’t want to give too much of the plot away, so I’ll just say the stakes of the novel are set up perfectly, and the payoff is really, really rewarding. Overall, A Robot in the Garden was a heartwarming and fun read and one that will stay with me for a long, long time. (New life goal: to wake up and find a robot in my garden.)

Verdict: A book that I think will appeal to many of us. It’s a light read with some really heartwarming moments. It gets a 5-star thumbs up from me!

Read if: You like reading about special robots, like books about friendship, and/or have ever wanted a robot best friend.

Are you planning on reading A Robot in the Garden? If you had a robot, what would you program it to do? Cook? Clean? Drive? Something else?