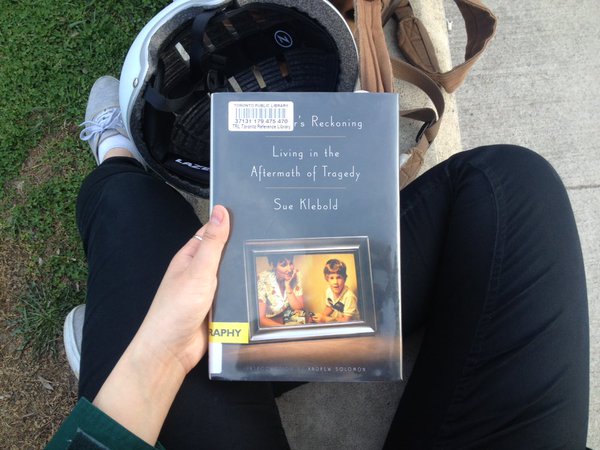 Hi friends! It’s been a while since I’ve properly reviewed something on this blog, eh? I needed to take a bit of a break from reviewing as reading was feeling a bit like homework for a while there — I was reading on a (self-imposed) deadline and constantly analyzing every word and articulating my feelings as I was reading. I mean, that’s not really a bad thing to do generally, but when I start feeling obligated to do it is when I personally need to take a break.

That said, I’ve been reading some really, really good books lately. I keep catching myself mentioning two titles in particular and Sue Klebold’s A Mother’s Reckoning: Living in the Aftermath of Tragedy is one of them. (The other title is also a non-fiction title, which is shocking for me!)

I picked this book up out of curiosity. I knew that this would be a difficult read, but I really didn’t know what to expect. What I found within the pages was not only a heartbreaking recount of Sue Klebold’s experience before and after her son participated in the Columbine shooting, but also something very valuable: a lesson to be learned. To Sue Klebold, and, indeed, many people in her community, Dylan Klebold was just a regular teenager. He could be shy in social situations and moody when reminded to do a chore, but that was seen as common teenage behaviour. Nobody saw the tragedy coming. Sue Klebold reiterates this throughout the book — “He seemed so normal” — when, she admits, the heartbreaking fact of the matter is that the family had misinterpreted many of the warning signs of Dylan’s depression and brain disorder. While he seemed like a regular teenager on the outside, Klebold later learns via his journal that he was suicidal – probably a big reason why he participated in the Columbine shooting in 1999.

Here’s where I’ll admit that I’m fascinated (and slightly terrified) that no one was able to pick up on Dylan’s depression. I’ve often wondered how many of my peers are suffering silently, and whether I would be perceptive enough to notice when someone needs help. In the forward to the book, Andrew Soloman writes that the spotlight was shone on the shooters’ parents in the aftermath of the tragedy because the community — and, really, the world — needed a way to rationalize what had happened. We want to believe that this could have been prevented if only the parents had done something differently. But, as Klebold writes, she was an attentive parent; she did love her child; up until the shooting she thought she was doing a pretty good job of parenting. The one thing she mentions often is that the signs that seemed so insignificant at the time, signs that she thought were just normal teenage behaviour, actually added up to one big arrow pointing to depression. If perhaps she had known to look out for these signs, maybe she would have been able to understand Dylan more before his death. (This revelation is one of the big reasons why Klebold wrote the book, as noted in the quote above.) And so I sometimes think: am I missing anything in my daily life? Can I be more attentive towards the people around me? Even if I might never experience anything as extreme as what Sue Klebold went through, it makes me wonder if I could help someone get through a rough patch by asking more questions or if it’s truly impossible to get someone to open up when they are deliberately hiding their pain from you.

Either way, it surprised me how much I appreciated reading Klebold honest writing. She bravely shares her experience as accurately and openly as possible. She tells the reader what she’s learned about spotting signs of brain illness, reflects on her mistakes, and works to spread awareness about suicide prevention. She also takes the opportunity to apologize to her son’s victims. Overall, this book was a difficult read, but I think it’s one that can help spread empathy and understanding to those who do read it. I can’t stop thinking about it.

Have you read A Mother’s Reckoning? What were your thoughts on the book?