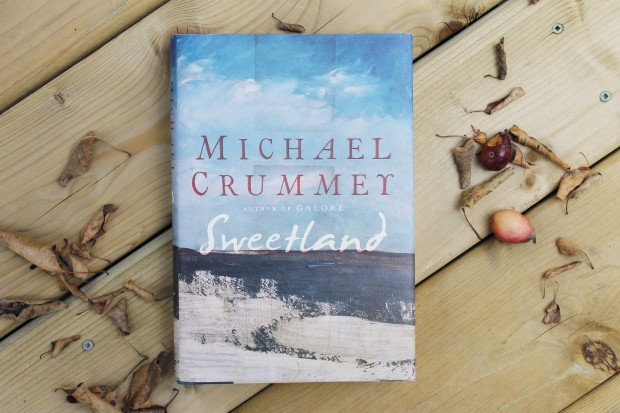 [I received a copy of Sweetland by Michael Crummey from its Canadian publisher Random House Canada. This does not affect my opinion of the book in any way.]

If you’ve been following my blog for a while you’ll know that I am a fan of CanLit (Canadian Literature). I spent many years misguidedly rejecting the genre because I thought it was all about landscapes and prairie life and things I couldn’t relate to but, while my experiences don’t always exactly mirror what I read, I have come to realize that that’s exactly the point of reading: to learn about things that are unfamiliar to you, to get to know different types of people, to step out of your comfort zone and experience new things. This is exactly what Michael Crummey’s new novel Sweetland gave me.

Sweetland centres around Moses Sweetland and his hometown of the same name. It’s a small island off the coast of Newfoundland where generations of inhabitants have lived and died. When the novel begins, we learn that the government is in the process of reclaiming the land and all but a few people have accepted their compensation package to move off the island. One of the stubborn residents refusing to take the package is Moses Sweetland, who is extremely tied to the land and its history. He will not back down, even as the government threatens him and his fellow Sweetlanders try to persuade him to leave. Throughout the novel we learn more and more about his (and his family’s) history and relationship with Sweetland and that knowledge helps us to understand why Sweetland is so reluctant to leave. So will he be persuaded and take the package in the end or will he be left alone on the island to fend for himself after everyone has left? You’ll have to read it to find out.

The part of the book that didn’t work quite as well for me is actually the aspect that I learned from the most. I have always been a city girl and have never been to the maritimes, so there was a lot in the book that I simply didn’t understand or needed a while to get used to. And while I do think that my unfamiliarity with these terms and concepts did affect my enjoyment of the book, I also know that I have benefited from reading about these new things. I learned the proper fishing and hunting jargon as I followed Sweetland as he performed his daily tasks and glimpsed into a life that I have never (and probably will never) live. I truly believe that my horizons have been broadened, and I’m thankful for that.

That being said, there were definitely aspects of the story that I really enjoyed. I loved learning about the relationships Sweetland had with his fellow Sweetland residents. They are all unique, well-rounded characters, from Jesse, his great-nephew whose (imaginary) best friend is Sweetland’s dead brother, Queenie Coffin, who has not left her house for many, many years, to the Priddle brothers who are a rambunctious pair who don’t really fit in. There’s also a darker side to the community; there’s a priest who leaves and comes back, and a secret about his brother that Sweetland has been holding in for a long time.

Overall, I did enjoy reading Sweetland as it took me out of my comfort zone and introduced me to new things. The characters are wonderful and it’s truly inspiring how tied to his hometown Sweetland is. As someone who has moved around all her life, that’s something that I admire and wish I had. Even though I wish we were able to go into Sweetland’s head a little bit more (rather than being shown everything), I think this book is one that will be adored by many. To me, this is the quintessential Canadian Literature that I used to reject but have grown to love.

Verdict: A book that took a little bit of effort on my part to truly understand (due to the jargon that was unfamiliar to me) but ultimately taught me a lot about island living and feeling an intense connection to a community and place. Sweetland may be difficult for some at parts (again, the unfamiliarity aspect), but if you’re willing to keep an open mind, it is one that pays off.

Read if: You want to read about a loyal, stubborn man and his connection to the land he grew up in, want to learn more about living on an island where self-sufficiency is key, want to broaden your Canadian Literature horizon.

Ps. Naomi at Consumed by Ink has a really wonderfully-written review of this book on her blog that I would suggest checking out. Her perspective on the book positively affected my reading experience and helped me appreciate it a lot more despite my minor frustrations with it.

Are you a CanLit fan? Have you read any Newfoundland literature? Will you be checking out Sweetland?

**Sweetland by Michael Crummey will be published by Random House Canada on August 19th, 2014**